Established in November, 1994, “Jeanne Rabin’s Ensemble” has consistently been an outstanding group on the Israeli choir scene in its level of performance, its repertoire, and in its energy. Being one of the most popular and sought after groups in Israel, “The Ensemble” has had innumerable performances of every sort and has participated in various festivals (including “Abu Ghosh” and “Festival Arad”), competitions (winners of “Shirat HaAretz 2001” and gold diploma recipients at “Sulam Mila 2002, 2004, 2006), official Israeli national and municipal events as well as a long list of private productions. Their repertoire leaning is towards “pop” (songs by the Beatles, Sting, Queen, Billy Joel, Aretha Franklin…), Israeli oldies and modern Hebrew “classics” which contain that “special something”: On this list can be found songs by Shalom Hanoch, Yoni Rechter, Daniel Salomon, Yonathan Razel, and Yaruslav Yakobovitch. The “Ensemble” specializes in musicals (selections from “West Side Story”, “Phantom of the Opera”, “Guys and Dolls” and “Rent”), jazz favorites (Brazilian – Jobim, Vinicius, Bonfa – and American – Gershwin, Berlin), swing and even blues. Yiddish? We got it. Eurovision? Bach? But of course!

For "Jeanne Rabin Ensemble" AUDITIONS AND performance bookings, contact us!

The format and textures of the arrangements are varied: most songs are performed by the choir (some thirty singers) as a whole in five part harmony, but some numbers are just for the women, some for the men, and in some, Jeanne sings solo and is accompanied by the group. In this category you can find “Lady Madonna”, “Eres Tu”, “Kan HaBayit”, “Natural Woman” and Elton John’s “Border Song”.

“The Ensemble” periodically welcomes new singers into its ranks. Prerequisites: a good voice, rhythm, a love of international pop and jazz, previous singing experience and a fun-loving attitude! Note reading an asset. Interested? Contact us! 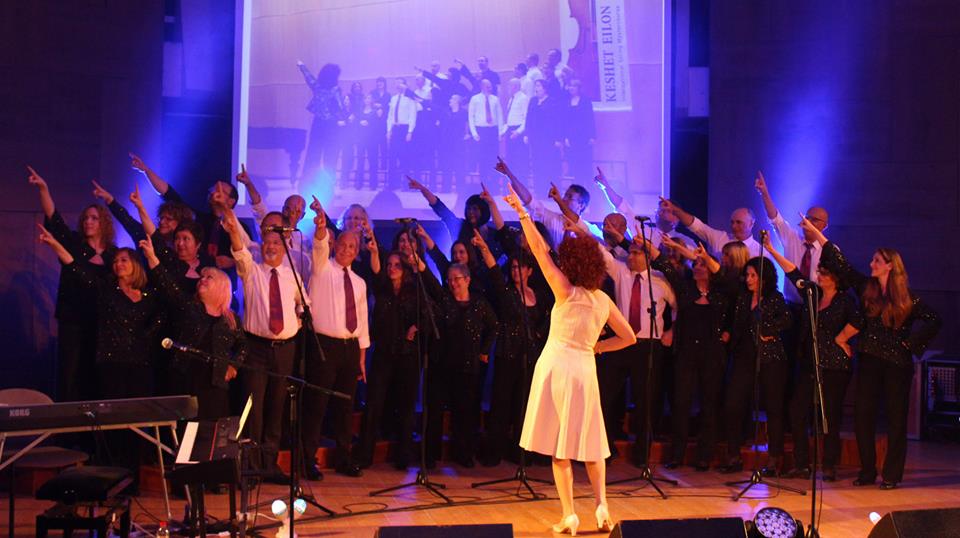 In addition, “The Ensemble” participated in the recording of “Seret Tchelet” (“These Blue Ribbons” by Pnina Isseroff, arranged by Jeanne Rabin), a song dedicated to the families of the captured and missing soldiers of Israel.

A Day in the Life of a Fool